Welcome to Poseidon Equine,
where your horse is our priority.

We’ve helped thousands of horse owners on their horse’s journey to better health and performance.

We believe that true health begins in the gut, and the way forward to a horse’s health is through promoting strong digestive and gut health.

That’s why we’ve teamed up with some of Australia’s leading equine experts to develop our products, and are committed to delivering every horse owner quality and affortable products that are manufactured at the highest standard.

As a horse owner, you may see problems like anxious behaviour, girthiness, laminitis, weight challenges (and many more) and accept them as ‘normal’ for your horse.

But are they really ‘normal’? And if they aren’t, what’s causing them?

Leading scientific research in equine nutrition is helping us to understand that poor gut health is playing a major role in the cause of all of these issues.

I have been professionally involved with horses most of my life as a competitor, coach and EA National assessor. Digestive EQ and VM have been the best supplements I have ever fed to my horses. I am now feeding more simply, and my horses have never looked or performed as good.

Digestive EQ is a gut health supplement developed to support the digestive and immune system of your horse. Its unique formulation is designed to assist with fore gut and hind gut digestion, and inflammation and immune challenges. It also contains a mycotoxin binder to negate mycotoxins and help get your horse’s gut healthy again. It comes in a great-tasting, easy-to-feed powder form.

Developed to complement and be fed alongside Digestive EQ (although it can be used on its own), Digestive VM is the ultimate vitamin, mineral and amino acid supplement. With ingredients like organic selenium and chromium, natural vitamin E, plus essential amino acids, Digestive VM is platinum standard. For added digestive support it also contains glutamine and a yeast derived prebiotic. It comes in a great-tasting, easy-to-feed pellet form.

HOW DO YOU FEED TO MAKE YOUR HORSE THE HEALTHIEST IT’S EVER BEEN? 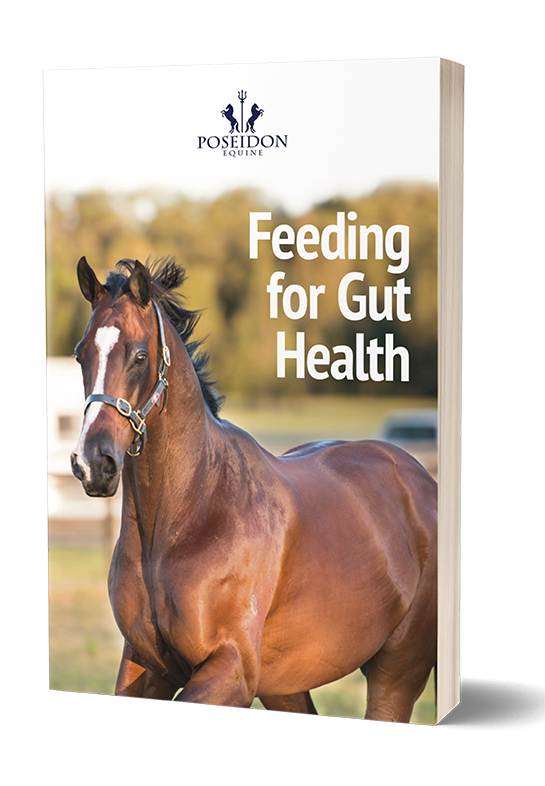 With leading scientific information presented in a way that's easy to understand, this book will help you discover exactly what you can do to keep your horse healthy and happy.

Read it and make changes now for immediate results in your horse's wellbeing.

Here at Poseidon Equine, we are not only passionate about our horses, but

brilliant partnerships as well. That’s why our Ambassador team consists of our

Best practice manufacturing & quality FIAAA ingredients - so you know our products are of the highest quality.

Formulated & advised by the most amazing equine nutritional and veterinary consultants. Our educational content is written by two leading equine nutritionists.

The best customer service! We take the time to listen and respond ASAP.

WHAT ARE HORSE OWNERS SAYING
ABOUT OUR PRODUCTS? "We have been using Digestive EQ for 6 months on my two yearling colts, one who was going to the yearling sales and one who had OCD surgery and had to spend 6 weeks in a stable.

The most notable benefit was the fabulous relaxed temperament both colts exhibited. Nicholas the colt that had surgery was so amazingly quiet for being confined for such a long period and Gerry was a pleasure to work with during his yearling preparation.

Both colts had amazing coats, without being rugged and also excellent body condition, even Nicholas who was on a very basic diet due to his confinement after surgery had fantastic coverage.

I now use Digestive EQ on all my yearlings, any horses on medication and also those who need a hand in putting on condition. Can't recommend it enough."
Joanne Anderson

"We acquired Clyde an 8 year old Clydesdale Cross in November 2018.

He was grossly overweight and had not had any hoof care. After having his feet trimmed he developed very serious laminitis coupled with two huge foot/coronet band abscesses. In December he was in so much pain and the condition was so serious we did not think we could save him.

The challenge that we faced when designing his diet, was encouraging him to eat when he was in so much pain, but at the same time assisting him to lose weight and manage then long term healing process of the laminae and hoof.

In developing his diet, we included Digestive EQ after seeing some many wonderful testimonials as we knew all of his health issues would require good gut health. The results speak for themselves and we are so glad that we put him on Digestive EQ as it has without a doubt assisted in saving our horse’s life."
Susie Dawson "Within 4 weeks of starting Digestive EQ, Illarak Donntrell was a much happier horse and presented with a much improved work ethic, an improved topline, an extremely glossy coat, an improved attitude in his stable and general handling.

Our feed bill decreased and feeding regime simplified. We are a small family run stable and love showing our horses. We aim to produce and breed horses of the highest calibre and now run all of our equines on Digestive EQ with great effect."
Rachel & Sophie Walker

"Just wanted to show you results of the Digestive EQ on my two ponies. Previously on this horse you could not use any shine/coat products as his skin was so sensitive and he just reacted and was itchy and suffered from hives. Now I don’t need to use anything as his coat is amazing. . Due to the stress of travelling and a new home, he had suffered from ulcers, so I used gastric ulcer treatment. The only product that worked was Digestive EQ. I cannot recommend your product highly enough. First photo July 2nd photo 2 weeks ago at HOY."
Jody Rybarczyk

By clicking “Accept All Cookies”, you agree to the storing of cookies on your device to enhance site navigation, analyze site usage, and assist in our marketing efforts.

 Discount code found, it will be applied at checkout.